skip to main | skip to sidebar

As we were told that it is too wet to drive through the Chobe NP we headed for Nata. The distance from Kasane is about 300 km, but the last 120 km are terrible. Potholes everywhere and to make matters worse trucks all over the place, trying to avoid driving into the potholes there quite often on our side of the road. It was Easter weekend and so the streets were packed. Botswana also made an effort and put a road safety tent along the road, where everyone had to stop and listen for a couple of minutes on how to drive. After they have told us that the road will be really bad we have asked them why they didn’t fix it and instead put a road safety tent next to the street. We were assured that within the next 5 – 10 years the will not only fix the road but renew it! 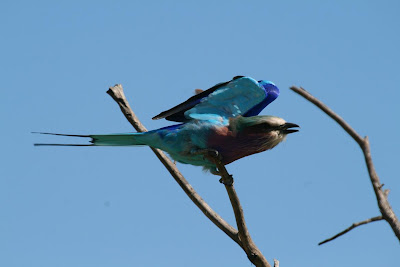 In Nata we stayed at the Nata Lodge Campsite (P 45.00 pp). The campsites are quite big and one can use the facilities of the lodge. Our tent neighbours were a couple from Switzerland. So we spend the afternoon at the pool bar exchanging news from back home (since we haven’t been in Switzerland for a long time our news mainly consisted of Cape Town gossip). We had a good time but by the time we returned to our tent, a huge Botswana family took over our campsite! It was the Easter Weekend, but there were still empty campsites, so we don’t really know why they wanted to be so close to us, especially since the did not even have the courtesy to greet us. We could hear them snoring during the night and in the morning when they packed up they even took some of our stuff. Luckily we found out just before they left and became everything back. We spend the next day at the Nata Bird sanctuary; it was quite a fun ride, as most of the park was flooded. We took the Swiss couple along, so we could go more off-road than usual, as we had a backup car. The cruiser handled the mud brilliantly. The Nissan of our new friends got stuck once so we had to dig a bit but also no serious problems there. 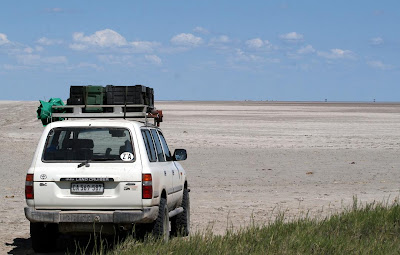 From Nata we went due east towards Gweta where we stayed at Planet Baobab (P 49.00 pp). They have quite big campsites as well as nice bungalows but the highlight is their huge pool. We spent three nights in total in Gweta. We took the first day to explore the Ntwtwe Pan. From Gweta we took the road towards Kubu Island until we reached the pan. Once at the pan we drove along it and tried to follow the roads which were indicated on T4A. However this seemed to be impossible since all the tracks were either washed away or overgrown. 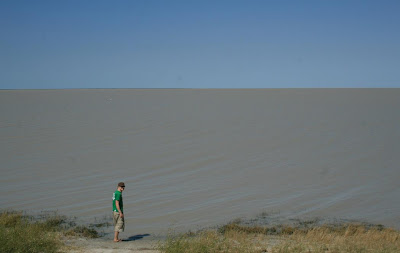 Once we left the pan we took a drive to Greens Baobab, a massive tree with a diameter of 25m. 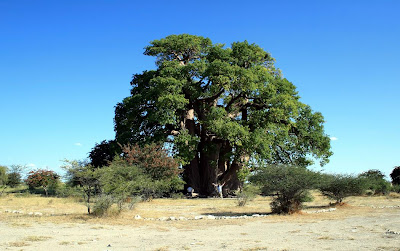 From there we finally found a track back to town. In fact there were a dozen of main and small side tracks so we decided to always drive in a north easterly direction which lead us back to Gweta. We gathered quite some new data for T4A. The next day took us to Nxai Pan. The roads here have been in excellent condition, except the 30km access road which was once again very deep sand. We came along a huge herd of zebras. Unfortunately no predators. I guess it would make sense to stay overnight in the park as there are lots of lions and cheetahs around.

After a last dip in the pool we went off towards Maun where we once again enjoyed a lekker lunch at Hilary’s close to the airport. We decided to check out the Old Bridge Backpackers (P 30.00 pp) which apparently Prince Harry chose as his Maun homestead. We met some Brits earlier which could not believe their luck in seeing their favourite royal there. The place is really lovely, just make sure that you get a campsite next to the river. Our plan to go into the delta only now was a good decision as it did not rain in the last two weeks and we hit the road for Moremi. The ranger at South Gate was not too sure if there is space at one of the campsite since they are always fully booked like 12 months in advance. However he chatted to the guy at North Gate and it did not seem to be a problem to get a campsite up there (pitch and bitch always seems to work in Botswana). The ride up to North Gate was not too spectacular and we were already wondering if there are any animals in the park but big herds of elephant and lechwes proved us wrong, later in the day. The chap at North Gate was very helpful and booked us in for the night and gave us a permit for Xakanaxa on the next day. The road from North Gate to Xakanaxa was once again in good shape there apart from one deep water crossing. All the mud pools could be avoided by little detours. We decided against a boat trip since they wanted to charge the two of us for the whole boat which would have been 300 Pula per hour. It would be a good deal if you are more people than we were since you can bring along up to 12 people for the ride. The area around Xakanaxa had still quite a lot of water and many ways could not be driven but we could still enjoy nice and long game drives since there are lots and lots of tracks up there. The next morning we drove via 3rd bridge back to South Gate. 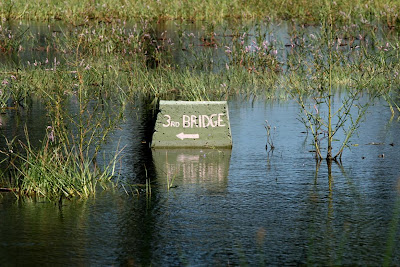 Some of the bridges in the South were badly damaged and we decided to rather drive through the rivers than over the scary looking bridges. In the afternoon we went back to Maun and the Old Bridge Backpackers. Another night at the campsite and we were off for another highlight. We booked a 1 hour scenic flight over the delta. The 1200 Pula for a 3-seater plane were definitely worth it and we saw herds of elephants, buffalos, different boks and giraffes. All of this in one of the most beautiful sceneries ever. 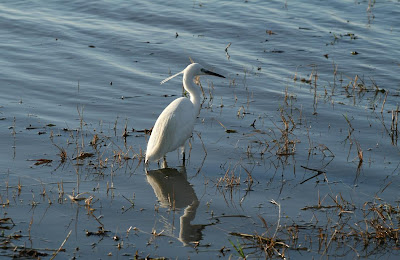 Via Chobe back to Kasane was next on the itinerary. We decided to get our bookings at the Wildlife Office in Maun this time and got a reservation for Savute and Ihaha. Savute and its surroundings are great. We did not spot the huge lion pride but could enjoy two lionesses in the evening until we got charged away by an elephant who did not want to share the close by waterhole with us. 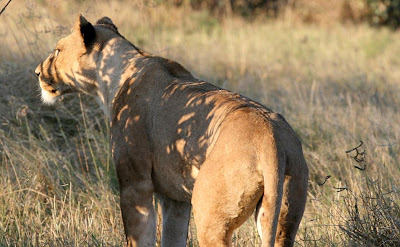 The next morning brought us up to Lynianty and from there back to the Chobe riverfront. Ihaha campsite is right on the river and offers stunning sunsets. Animal wise our highlights were a fight between two water monitors and a huge phyton which crossed our way. 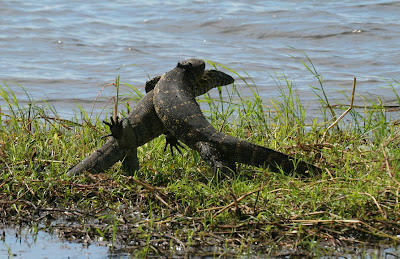 This time Chobe amazed us with hundreds of Elephants – but somehow they only appear after lunch time. In Kasane we went back to Chobe Safari Lodge (the camping fee increased to P 65.00 pp on the 1st April). The campsite turns out to be a little zoo. Last time there were hippos, pythons, monkeys. This time there are lions and elephants at the gate and monkeys, water monitors, warthogs etc. are present all day long. 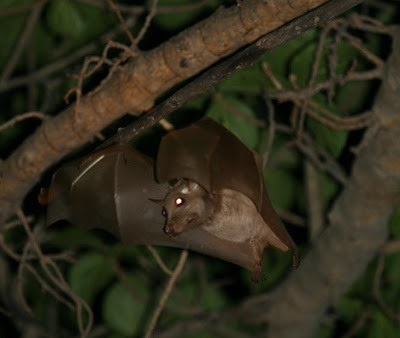 Our plan is to head from hear towards Zambia. We will keep you posted! 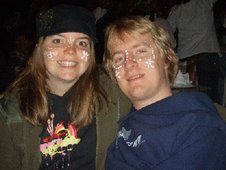